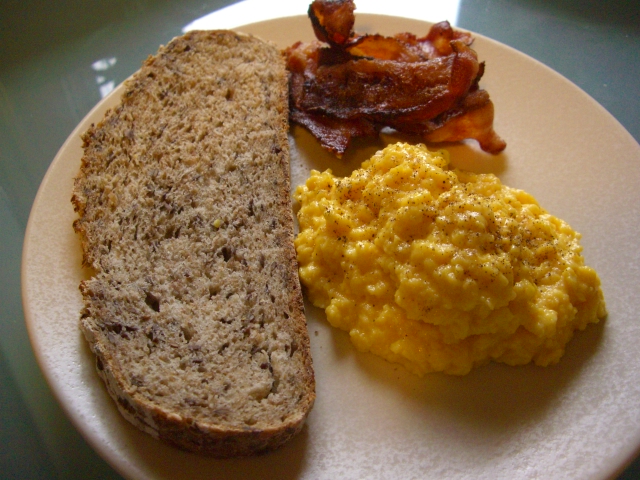 Didn’t take a picture since I usually demolish them immediately: made Ouef Brouille for a late lunch. Attached is a good pic, although I don’t use quite the same recipe or drag out a bain-marie, which of course would get me in trouble with the French. – Rhyd

Melt the butter over a low heat, while whisking the eggs in a bowl. Strain eggs through a sieve, and then whisk in melted butter. Pour the mixture in the pan still on low heat (or cook them properly in a bain-marie), and then stir constantly (but don't over do it, you're not whipping the eggs) for the next 5-10 minutes or so with a spatula/wooden spoon/whisk. If you're doing it the bastardized way like I do, you have to periodically take the pan off the heat while continually stirring. When the eggs reach the point that they look and behave like oatmeal (see attached pic from STIR THE POTS), remove from heat, and add the creme frache/milk to stop the cooking. Spoon over artfully cut slices of bread, the salmon, or just dump onto the plate and devour like I usually do.

If you're feeling super fancy, instead of breaking the eggs in the beginning, cut the narrow end off with a serrated knife, leaving a wide enough opening to get a small spoon in. Rinse the egg shells thoroughly, and leave them cut side down on a paper towel to dry. When you're done cooking the Å“uf brouillÃ©, spoon it into the egg shell, and top with caviar. Jean-Georges Vongerichten made a huge splash a while back with a really nice take on this basic recipe, except his were spiced up with a vodka infused whip cream with cayenne pepper & lemon juice in addition to the caviar.

I've been playing a bit with the recipe, and am wondering what it would turn out like using Ghee instead of plain old melted butter.

More From This Chef »

A home for Jerks with Sporks!