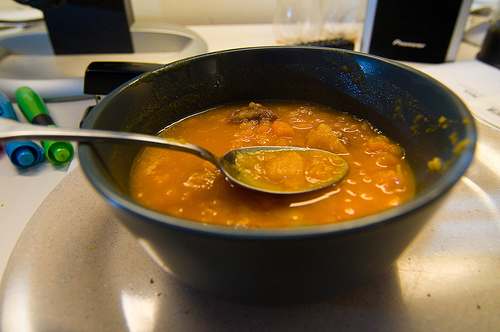 Finally got around to offloading the pictures of the truly fantastic soup I made. It looks awful, but tastes excellent. – Kalman

Added 1/2t cayenne (which is maybe a *tiny* bit too much, 3/8t should be better, split the difference for perfection)
2 packets Goya Sazon (con culantro y achiote)
Used a bay leaf
Sliced the potatos significantly finer than they did (I’d rather have most of the potato/sweet potato fall apart so that it becomes a part of the broth, rather than having chunks of it in the soup)
Added the broth a lot earlier, cooked the potatoes in broth significantly longer (again, so they’d disintegrate)
Used andouille instead of linguica
I also skipped the spinach, because a good portion of the soup was going to be leftovers/refrigerated, and I don’t think spinach holds up well like that (in liquid, anyway).

Using potato masher, mash some of potatoes in pot. Add browned sausage to soup. Stir in spinach and simmer just until wilted, about 5 minutes.

Stir in remaining 1 tablespoon oil. Season with salt and pepper. Divide among bowls and serve.

More From This Chef »

A home for Jerks with Sporks!